skip to main | skip to sidebar

After finally finishing my SpaceHulk board, finishing my Horus/Sanguinius—figured it was time to take it out for a walk.  My 6 year old son had been asking me to play for a bit now—so, what better game than a Father vs. Son game—with a Father vs. Son scenario!  He, as always, wanted to play the good guys—so I was going in charge of stopping the false Emperor and giving glory to Horus.  Here is the board setup; 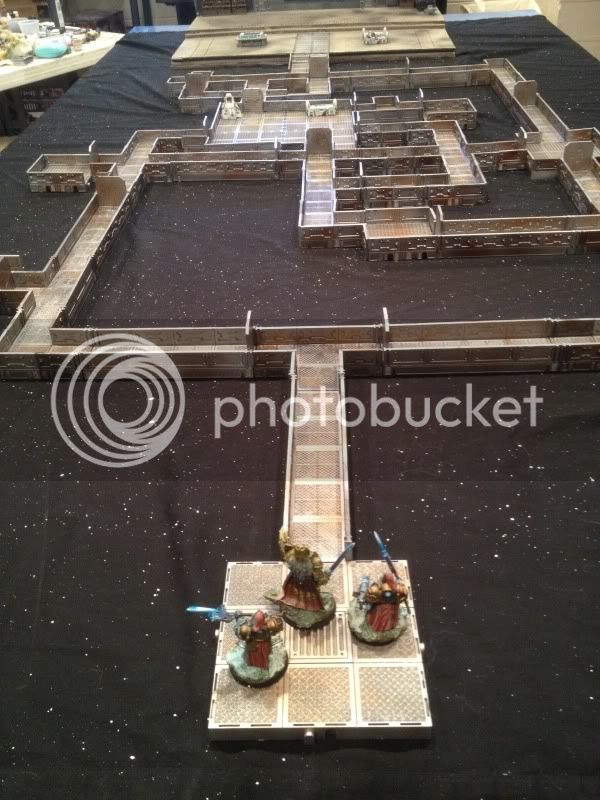 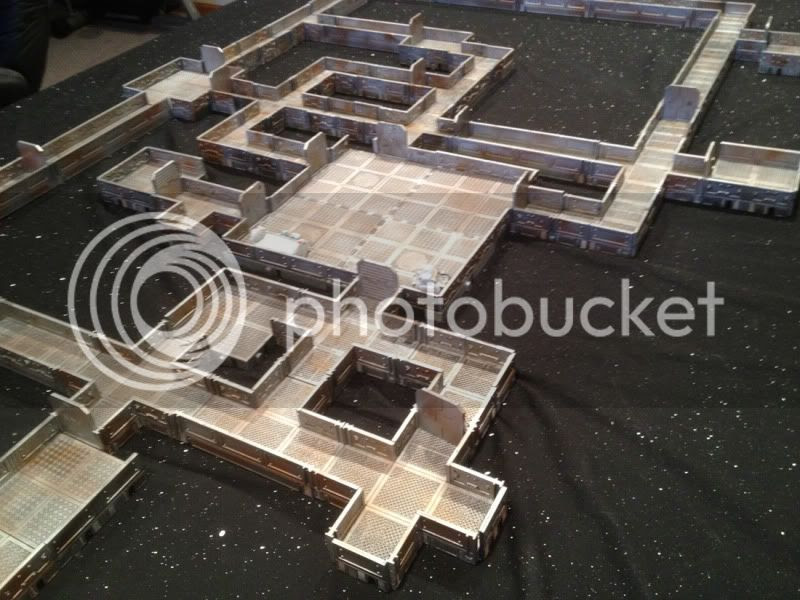 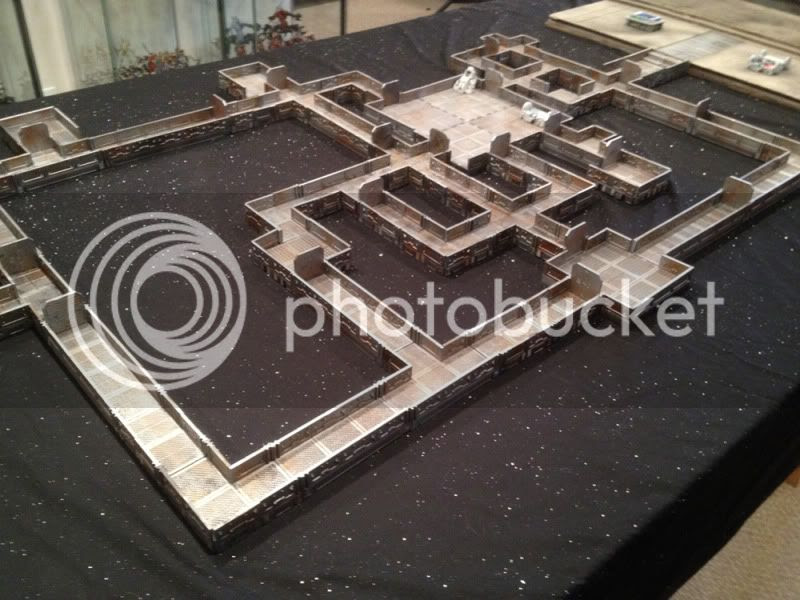 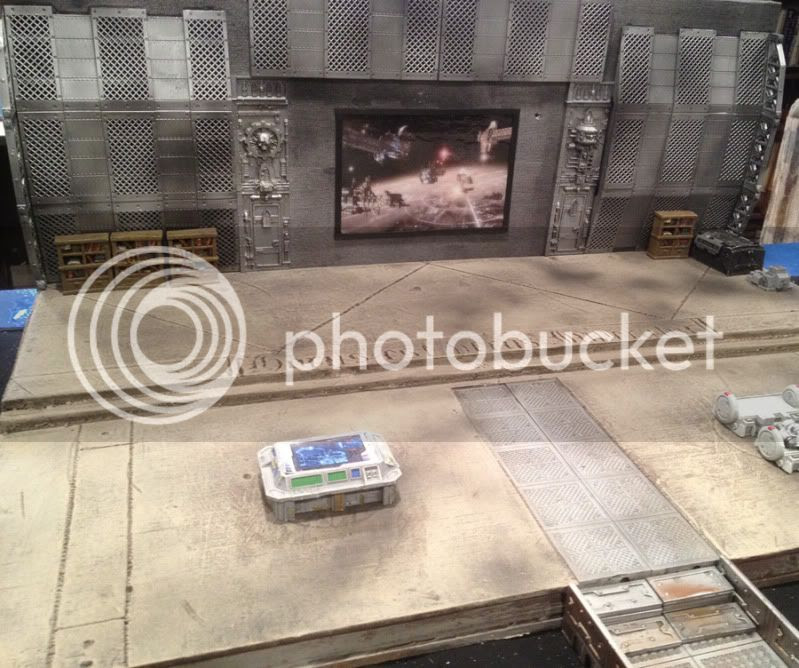 As some of you might wonder, the 3d Space Hulk tiles are made by a company named Creative Gamescapes.  Their site is located here;

I have no affiliation with Creative GameScapes—but boy am I a fan of their product!  It’s a modular tile set that is extremely easy to put together, stores well and is made of rugged (I’m talking, you could probably run it over with a car!) plastic.  Just a really great product put out by a super friendly company—I cannot recommend them enough.  So on to the game!

The General Rules:
Without going into a great amount of detail, the rules are pretty simple—the Emperor starts with two Custodes and as he explores the ship, they can find other trapped Custodes to aid the fight.  However, given they are on quite possibly the most evil Astartes ship in existence—they are also bound to find some Daemons along the way.  As the Chaos player, I rolled on my little chart and made some random Warp Points—along with some random trapped Custodes.  Depending on that roll, I might get a couple of Bloodletters—Flamers—or perhaps a Herald.  Once the Emperor or any Custodes approached or opened a door into that room/point, I rolled on the chart.  So first turn….

My son advanced the Emperor to one side and two Custodes on the other “They aren’t as strong so they need buddies”.  Makes sense to me.  As the Emperor rounded a corner however, the first Warp Point ignited and a handful of Daemons erupted from the rift.  Unfortunately for me, I was facing the Emperor or Mankind and rolled miserable on the chart.  Three Bloodletters charged to their doom, inflicting no damage to the God Emperor; 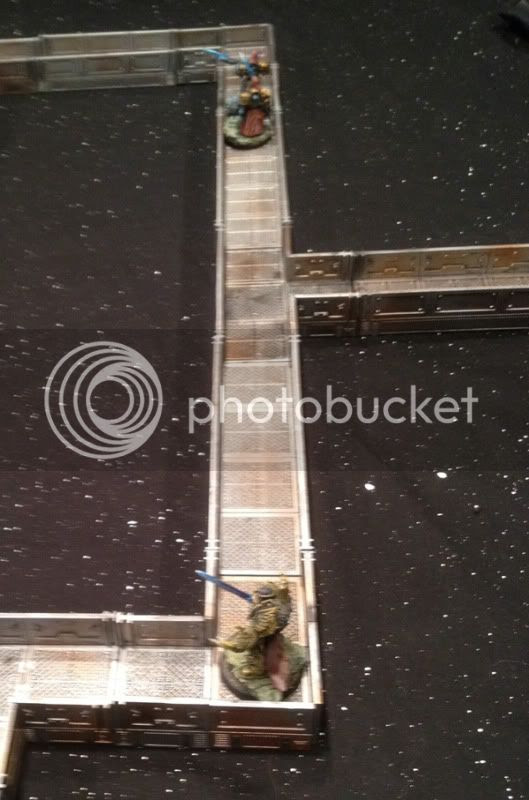 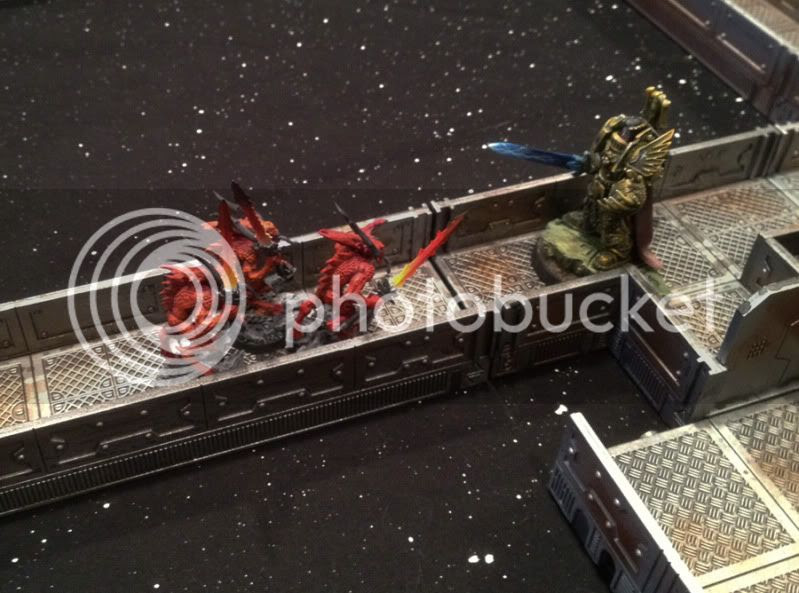 The Loyalist advance continued on the right side—and they decided to split up yet again (This would prove unfortunate for one of them).  While one Custodes discovered a friend and some enemies, the other lone Custodes just found enemies!  The Emperor continued his advance and found a single Custodes surrounded by Daemons in a small sub room.  Now, Nathaniel had a single Custodes fighting for his life in the middle—and small scrums to the right and left of the board. 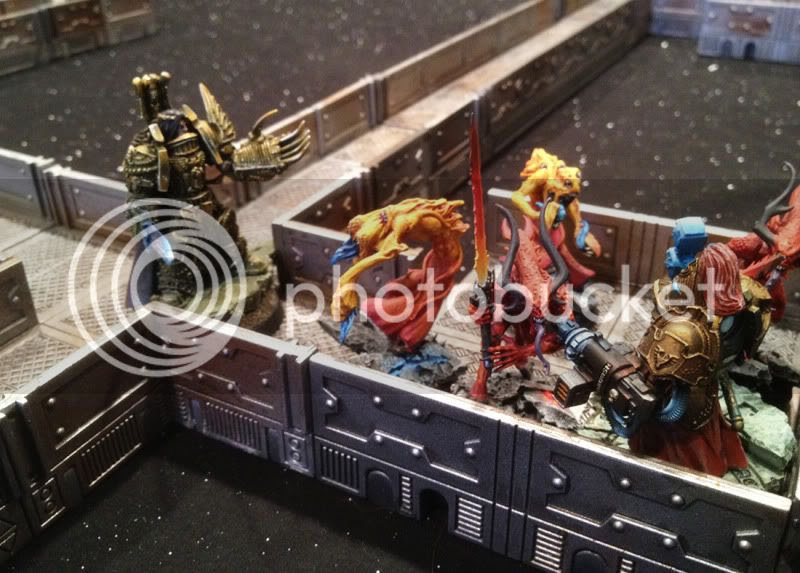 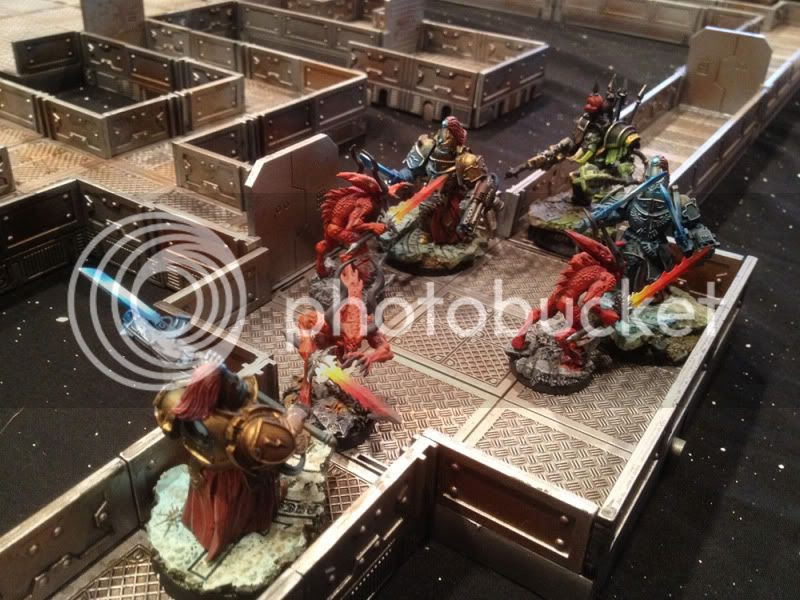 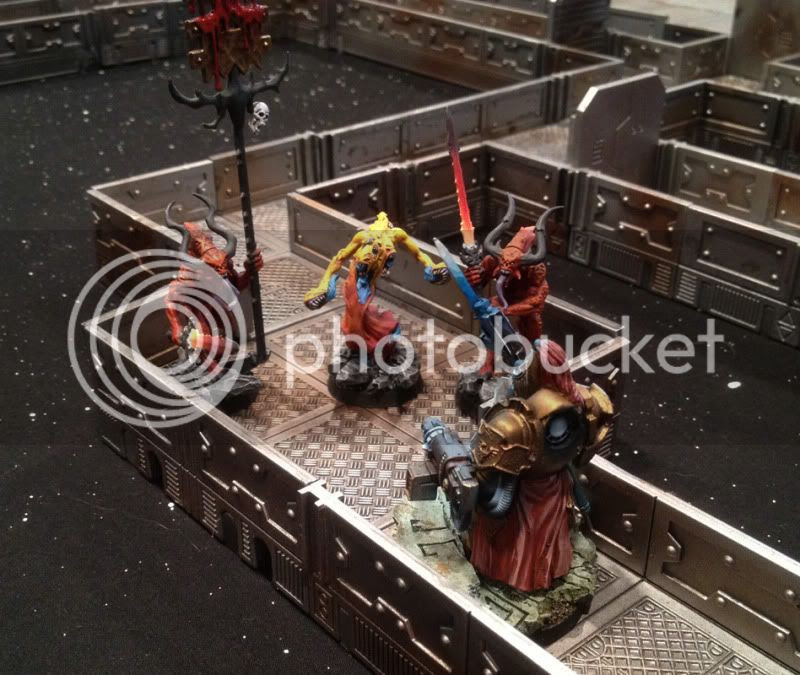 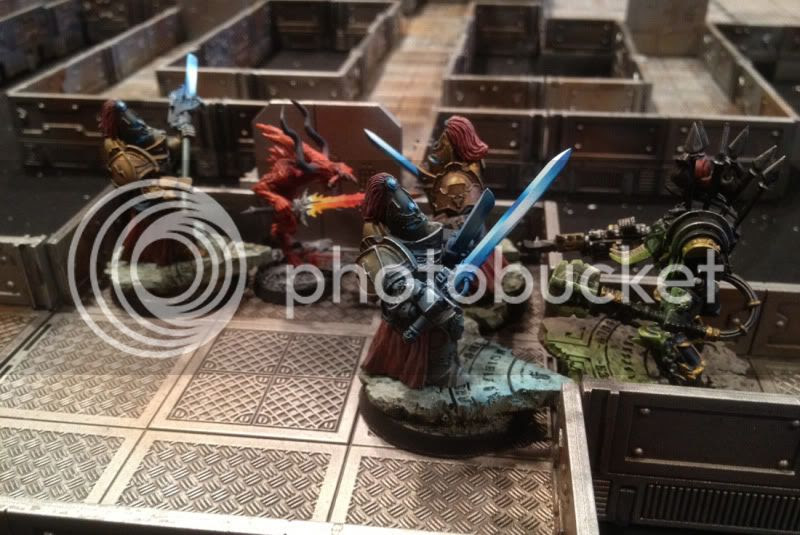 Slightly wounded, the Custode in the middle of the board advanced—and found yet more bad luck.  I rolled pretty high on my Warp Chart and got Skulltaker—whom promptly took the Custode’s head.  Score one for the Ruinous Powers!  The Emperor and his Custode advanced to the middle room—with the other wing wrapping up their combat and continuing on as well.

Turn 5 saw a surprise for the Loyalist—I had secretly decided to let Sanguinius show up to fight Horus—and if he managed to wound him, make it a bit easier for the Emperor to finish him (Old school fluff)--however I made Horus pretty tough so didn't know if it would happen or not.  Sure enough, leave it to the 6 year old to roll my Dakka dice like this; 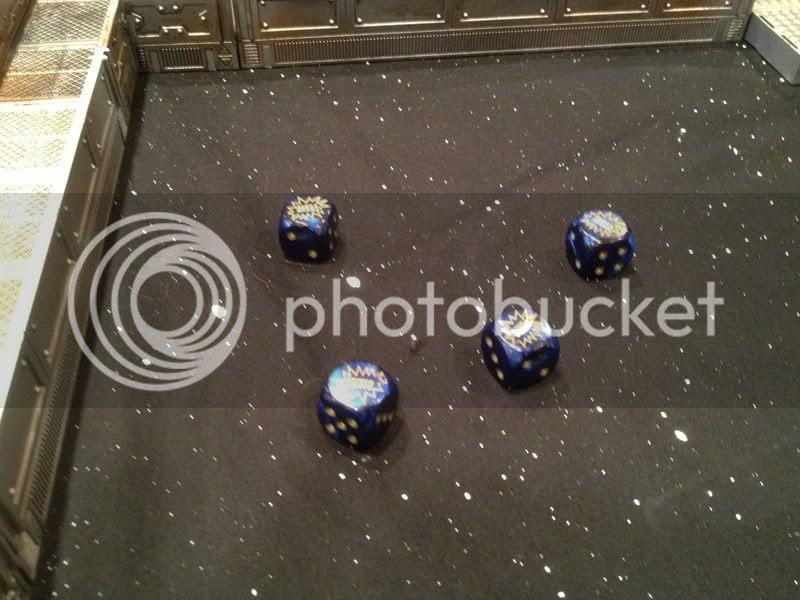 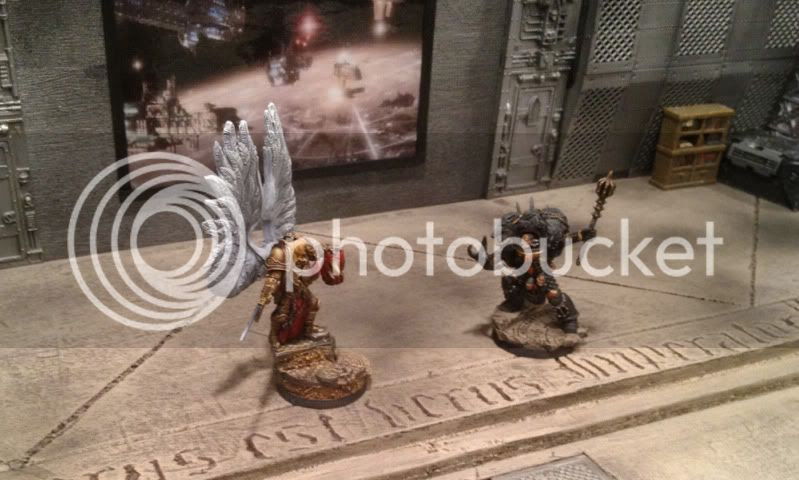 This battle would continue through the next turn.  In the middle of the board, everything met in the large room—and a big battle broke out.  Warp Points erupted, a new Custodes was located—and we went to rolling dice.  Minutes later, he had lost a couple of Loyalists—and the room was cleared. 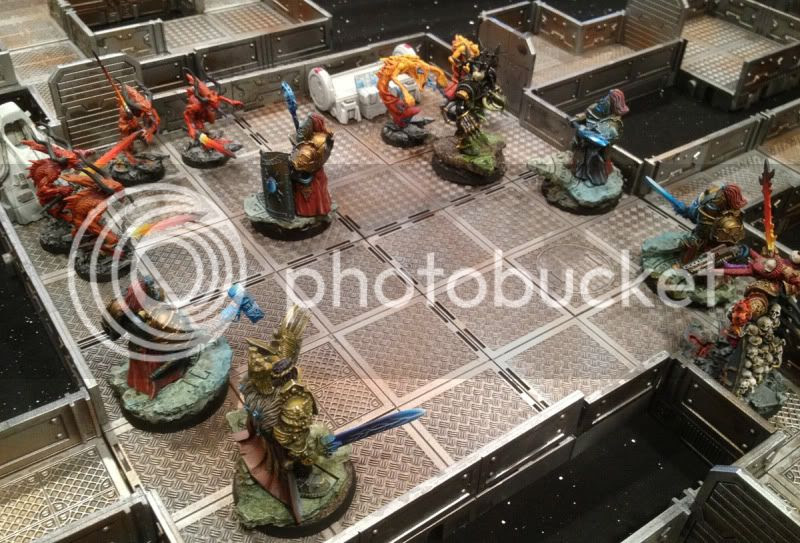 So, Horus took a wound—then promptly owned his brother (I might have made Horus a bit too strong); 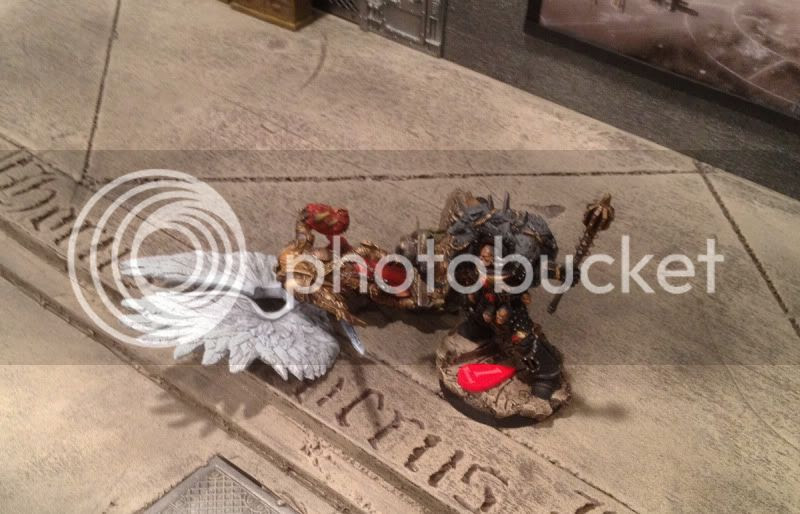 If only Sanguinius had held out, his father might have saved him in time—as it was, the Emperor advanced just in time to see his son die to Horus’s hands. 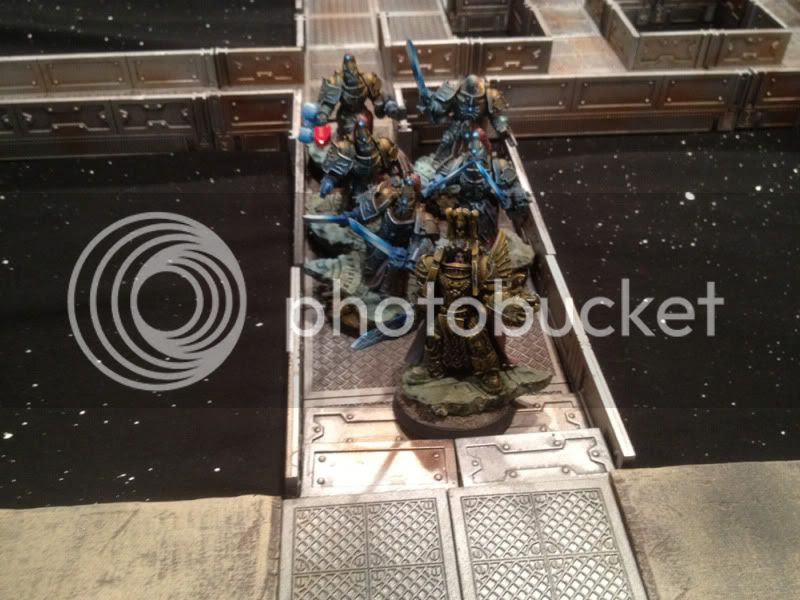 So the showdown is finally set and of course Horus has a plan up his sleeve.  My Justaerin Terminators arrive and shape the board up for a nice final showdown.  One of the rules of the scenario is the Emperor’s “Annihilate” power.  It’s a power that must be used to finish Horus—but the Emperor cannot use it until the third round of combat (It takes a couple of turns to make the Big E realize Horus is utterly evil and needs to be put down).  Everyone charges/counter charges—we make a father/son gentleman agreement to let the Big E and Horus fight alone—and it’s on! 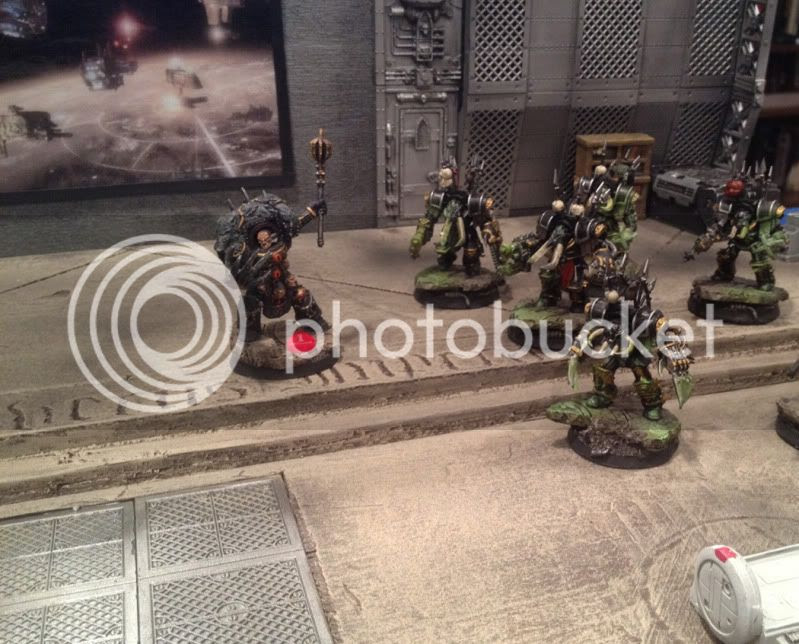 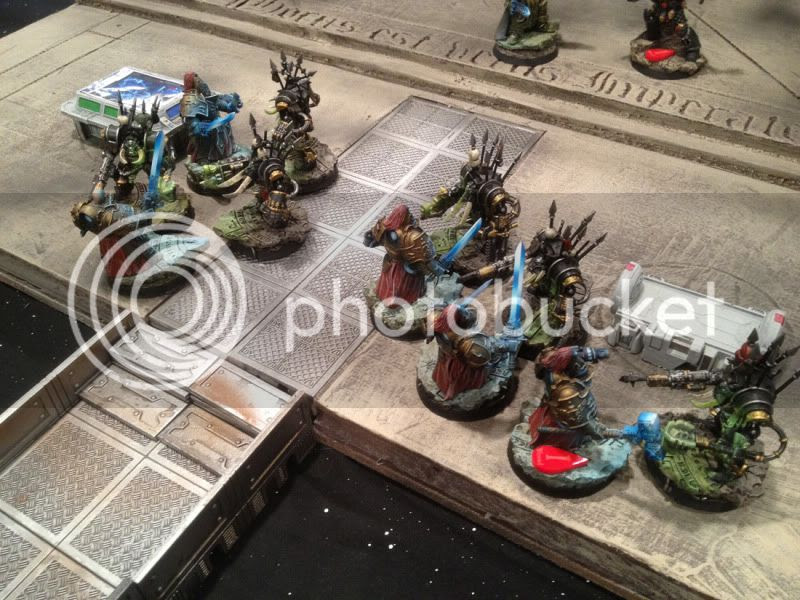 Battle continues with the Custodes/Justaerin—and I’m actually winning this fight.  I was up a model up going in—but the Custodes have a slight edge in stats—so I’m getting wore down in wounds.  The Big E and Horus continue their fight—and the Big E is down to a wound, Horus has two remaining. 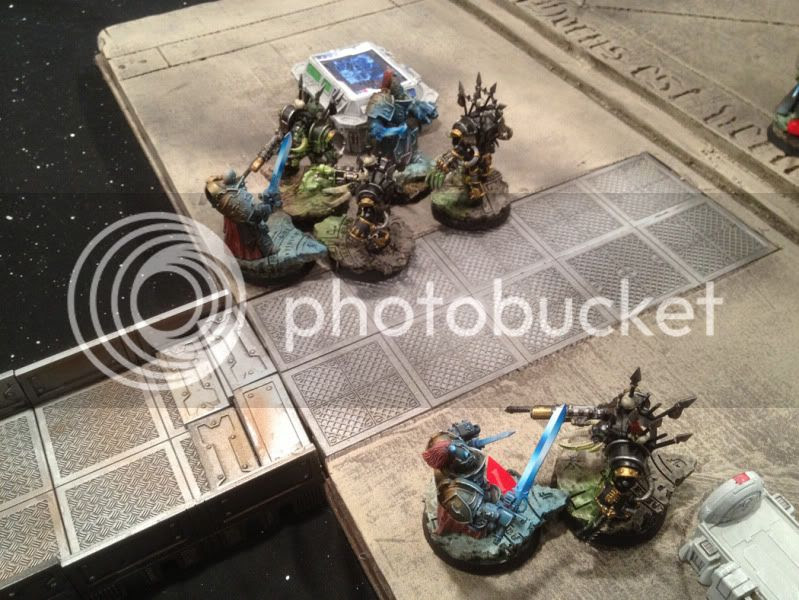 Well, a round of epic rolling for my son—the Custodes finish the Justaerin with one left standing (with one wound mind you).  The Emperor auto casts his power, being third round—and needs to roll at least a 2 for the number of wounds caused.  Of course, he rolls a 6 to rub my nose in it—and the Warmaster has fallen!  Not without doing some damage though—and had he rolled a one to wound—Horus would have likely finished the Big E. 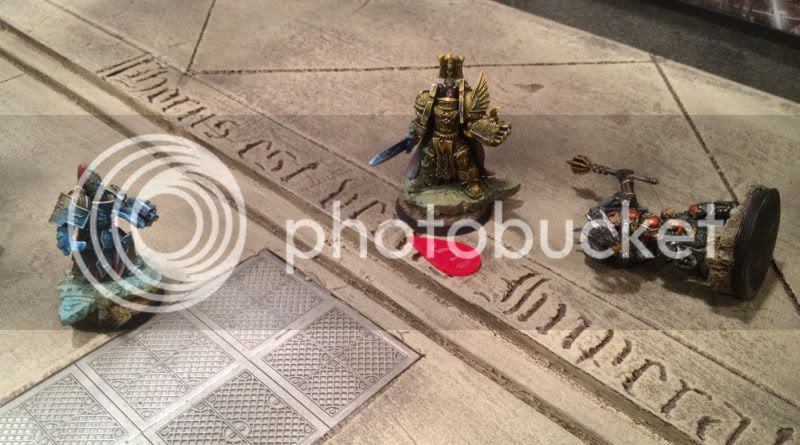 All in all, we both had a great afternoon.  It’s really special to share my hobby of 10+ years with my son—and makes me feel pretty old at the same time!  Now, to talk tournament organizers into letting me bring him along to roll my dice….

Love it. This is a great idea, a great storyline and some fantastic models. It seems like it played out fairly closely to what the fluff suggests too.

What did your son think of it?

Oh he loved it--mostly just the act of rolling dice and having "The Emperor!" win was enough for him :)

DreamHost is ultimately the best hosting company for any hosting services you might require.